The change curve is a commonly used tool in change management and is often misunderstood or overused. In this blog we explore the curve in more detail, it’s strengths and limitations , and how you can use it to understand and support people through change journeys.

All of us experience change and upheaval at some point in our personal and work lives. Some people like change, whereas others struggle with it and prefer things to stay the same. However, there is a model of change management which helps to explain the emotional reaction to change, no matter how differently each of us may deal with it.

It’s fair to say that everyone is experiencing change in a very real and multi-dimensional way this year. We are living through a global pandemic with unprecedented ramifications in all areas of our lives. This has meant people and organisations have been forced to make significant changes to their lifestyles, working styles and operations in a very short space of time with very little time for planning.

How was the change curve developed?

The Change Curve is a theory of how people behave and react to change developed by Elisabeth Kubler-Ross in the 1960s. This is probably the most well-known model to help people understand the way they react to change and upheaval. It was originally designed to propose how someone with a terminal illness would react to receiving the news about their illness. As such, much of the research that led to the development of the change curve theory is based in grief and bereavement. This does raise a question around whether we should be using this as the main model to explain how people react to business change and changing the way people work, but the curve can help us to understand our own reactions to significant change and loss.

The curve is, as the name suggests, a curved line presented on a graph. The horizontal axis represents time and the vertical axis represents morale / energy / performance. The curve moves through the original five stages of grief (denial, anger, bargaining, depression, and acceptance), but these have evolved over the years. The emotions along the curve are grouped into stages of transition, which tell us what people in these stages may need to support them. 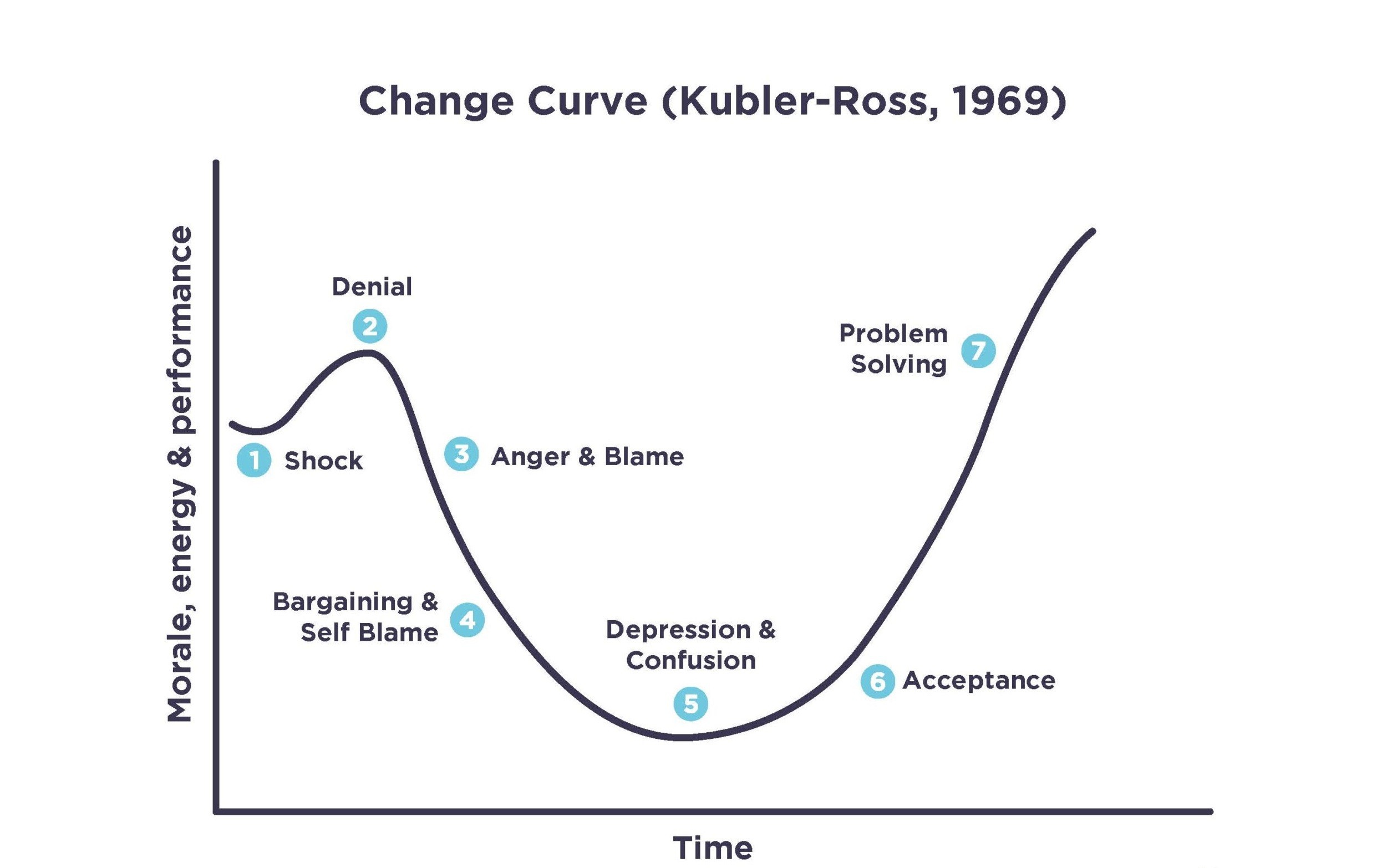 When the change initially happens, people firstly go into shock. This is the initial stunned, numb feeling you get when being told the news.

The second stage is denial. Here, people refuse to accept the news. This can be characterised by people burying their head in the sand, pretending that the change hasn’t happened or just generally disengaging with change all together. At this point the curve lifts, as this stage raises our morale as we tell ourselves that nothing has changed.

The curve then sinks low again as people start to experience anger. This can manifest itself in different ways, sometimes with people expressing anger at a range of things around the change. This could include people starting arguments with others, breaking rules and even ‘lashing out’. This is a very visible stage and you may have seen people expressing their anger as part of their reaction to the pandemic and its implications.

The fourth stage is where we start to engage with the process, but not in a constructive way. Here, people start to have trade-offs. There’s still an element of denial here as this bargaining can sometimes be unrealistic, and often about trying to minimise the impact of the change on themselves. People might just hold onto their old way with some tweaks around the edges to make it seem like they’re adapting, without making any real changes to the way they work, for example.

This is the lowest point of the change curve, where people feel the darkest of emotions. They can become withdrawn at this point and not want to engage at all. It’s common for people to retreat into themselves and start withdrawing from social contact. There is a tendency for people to become fixated on small issues at this stage.

During stage six, the curve rises vertically into acceptance. This stage is where people start to properly understand and accept the change. As a result, morale and performance begins to improve at this point. Once people reach the acceptance stage, they may start to engage more in the process. This may include asking questions or starting to make some small but genuine changes in their behaviour.

The final stage is where we move into a more constructive and positive mindset. Here, people start to meaningfully engage with the change. They may start to ask themselves what opportunities there are and how they can make the best of the situation. In a grief situation, this is often described as finding meaning. The final stage is a change in mindset to trying to adjust to the new way and look for the positives in it.

As we mentioned earlier, the change curve does have its limits. It is, as based on bereavement and it’s presentation as a graph does suggest that people move through all the stages in a linear motion. This is rarely the case. People can move forwards, backwards and get stuck at points along the curve. Some people never make it the end. You also need to bear in mind that people’s response to change is greatly affected by the level of influence and control they feel they have over the situation. If you’re a leader, it’s helpful to focus your team’s energy on what they do have control over and involve them in shaping how this change will affect them.

You should also be mindful of what is going on for other people. Whilst you may be frustrated that people aren’t engaging well, try to remember that we are all human. One of the things that makes change is difficult is when it’s layered and with lots of different levels, which is just what we’ve all experienced during this pandemic. Whilst you’re worried about people being productive, they may be worried about their health, elderly relatives, their children’s education, getting the food and medicine they need, managing the economy, their personal finances and whether they might lose their job. This is lot for anyone to contend with and ultimately makes the journey through the curve much more difficult.

Finally, it can be easy as a leader to discover new management tools and plot everyone onto it as though everyone is the same. There is a saying: ‘to someone with a hammer everything looks like a nail’ – try not to treat people like nails! Having a meaningful connection and support from others can really help people through change. So, take the time to understand where the people around are, how they are and what else they are dealing with personally, rather than putting them in stages based on a model.

How might you use the change curve to help manage the change you and people around you are experiencing now? Get in touch with us to discuss. You can also watch our Change Curve video at the top of this page. Are you Change Ready?

It only takes 5 minutes to find out if your organisation is ready for change with our free personalised review.

Get Your Free Review